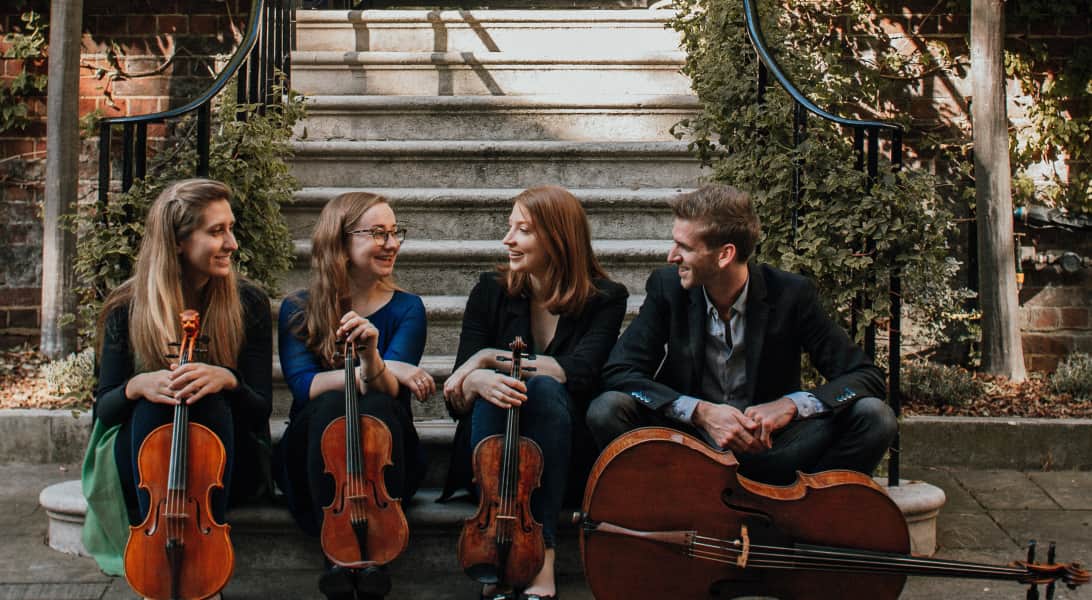 The first period instrument quartet to be selected as BBC Radio 3 New Generation Artists, the Consone Quartet are fast making a name for themselves with their honest and expressive interpretations of classical and early romantic repertoire. Formed in 2012 at the Royal College of Music in London, the quartet are winners of the 2016 Royal Over-Seas League Ensemble Prize, and 2021 sees them performing at the Wigmore Hall, Buxton, Cheltenham and English Haydn Festivals, touring the north of England and Scotland, as well as hosting a ‘Consone & Friends’ BBC Radio 3 series from the Dora Stoutzker Hall in Cardiff.

After a long eighteen months, Skipton Music returned with a triumphant performance by the Consone String Quartet – the first ever period ensemble to be nominated as BBC “New Generation” Artists. They play on instruments suitable for their core repertoire, the chamber music of the late 18th and early 19th century, with gut strings and bows intermediate in weight between baroque and modern bows. The result is a radiant and transparent sound combined with delicacy and finesse of phrasing – but with great energy and passion when the music calls for it!

All these qualities were in evidence from the opening bars of Haydn's quartet op.77, no.2, the last quartet he completed. The quartet revelled in the wit and elegance of the first and last movements, the rustic humour of the scherzo and the noble simplicity of the slow movement. It was particularly pleasing to hear the fast passages in the viola and cello, which so often sound gruff and muddy on modern instruments, played with such absolute poise and clarity.

The centrepiece of the concert was the quartet by Fanny Mendelssohn, sister of the more famous Felix. It is a hugely impressive work, from its troubled opening movement to the brilliant finale, and the quartet brought out all its changing moods and passions with complete conviction. There is an increasing (and long overdue) interest in the music of women composers of the romantic era and it was wonderful to hear a live performance of this noble piece.

After this, the quartet in D by brother Felix seemed almost lightweight. But there was much to enjoy in this sparkling performance, from the almost orchestral brilliance of the first and last movements to the more wistful mood of the two middle movements. As an encore the quartet played Puccini’s “Crisantemi”, an elegy for a friend – a quietly reflective end to a marvellous concert.