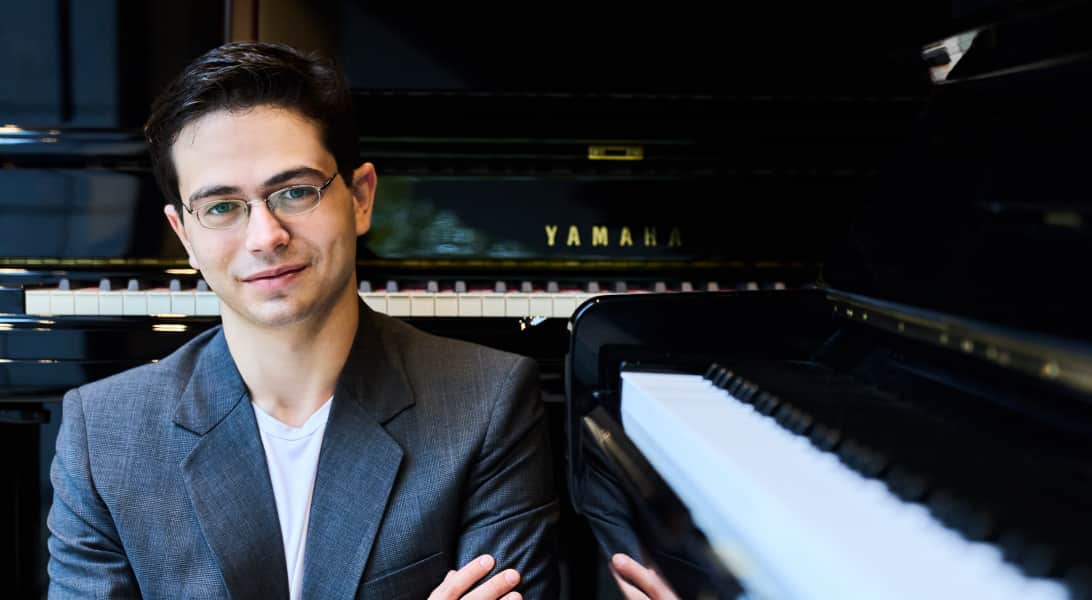 2021 was a very good year for the London-based Israeli pianist, Ariel Lanyi...

In September, Ariel won 3rd Prize at the Leeds International Piano Competition, having also been a prize winner in the international auditions for the Young Classical Artists Trust in London and Concert Artists Guild in New York. He made his debut at London's Wigmore Hall, participated in the Marlboro Music Festival in Vermont, and released his album of music by Schubert for Linn Records.

In 2022, Ariel will be returning to perform at the Miami Piano Festival and at Wigmore Hall, as well as appearing as a soloist with orchestras in the USA, Russia and in Israel. We are delighted to be welcoming him to Skipton Town Hall for a concert that will feature music by Schumann and Albéniz, alongside Beethoven's monumental late masterpiece, the Hammerklavier sonata.

Born in Jerusalem in 1997, Ariel completed his studies at the Royal Academy of Music in London in 2021.

For more information about the artist, see www.ariellanyi.com

Skipton Music is grateful to Ariel Lanyi for stepping in at short notice to replace the previously advertised pianist for this concert, Eric Lu, who had to withdraw due to a playing-related injury.

DRAMA AND DELICACY AT SKIPTON MUSIC

Skipton Music's 2021-22 season continued with a recital by the Israeli pianist Ariel Lanyi, substituting for Eric Lu who is carrying a long-term injury. It was an evening of strong contrasts – drama and delicacy in almost equal proportions.

Schumann's rarely-heard Allegro in B minor set the tone for the whole evening, in turns tempestuous and playful. Next came the much-loved “Kinderszenen” (Scenes from Childhood). Some of the individual movements are familiar, perhaps over-familiar, from the efforts of young pianists; but it was refreshing to hear the complete set played with such obvious affection and finesse. After this delicate interlude the first half ended with three pieces from Albeniz's “Iberia”, conjuring up the romantic image of Spain with their pounding rhythms and flamenco harmonies.

The second half consisted of a single work, Beethoven's monumental “Hammerklavier” sonata. As with the late string quartets, Beethoven writes music at the very limit – sometimes well beyond the limit – of what the instruments of his day could play. Whether this sonata works any better on a modern piano, with its brittle treble and muddy bass, is debatable: certainly there is a case for playing with a degree of restraint rather than trying to push the modern piano in its turn to its limits. In this performance there were welcome moments of rapt stillness, notably in the slow movement and in the dream-like introduction to the last movement. But the outer movements left your reviewer merely battered, not exhilarated. To be fair, other members of the audience enjoyed the performance more than I did.