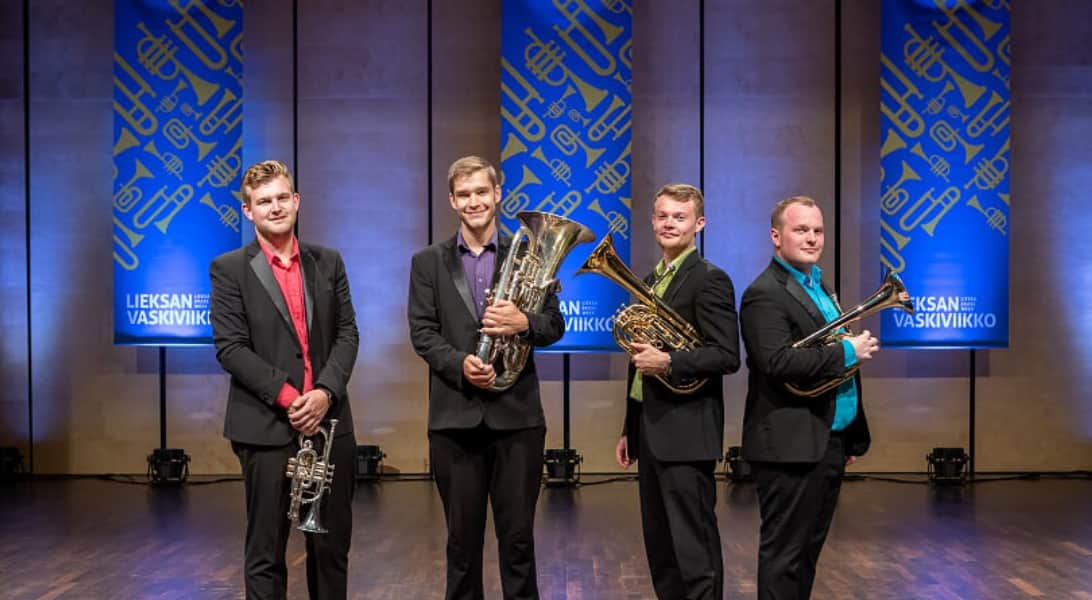 Formed at Manchester’s Royal Northern College of Music in 2013, A4 Brass comprises principal players from some of the UK’s top brass bands. The Quartet has a unique blend of instruments, creating an exclusive sound that stands out from the norm, so they have actively developed their repertoire, commissioning new music as well composing and arranging music themselves. Royal Overseas League Chamber Music winners and City Music Foundation artists in 2018, they have become the first brass ensemble to be awarded the prestigious Royal Philharmonic Society Henderson Chamber Music prize. A4 Brass have performed live on ITV and BBC Radio 3 and, in 2016, released their first CD ‘Mists of the Mountain’. In 2018 they became Honorary Associate Artists of the RNCM.

This concert is generously sponsored by Legal Records.

Skipton’s Christ Church was sold out for this hugely enjoyable concert by the A4 brass quartet, the fourth concert in Skipton Music’s 2019-20 season.

The quartet comprises an unusual combination of instruments: cornet (or flugelhorn), tenor and baritone horns, and euphonium. Indeed, the quartet think they are the only example in the world! On this showing, it would be surprising if they did not soon have competitors. The ensemble provides a sonorous and beautifully blended sound in slower pieces, but – at least with such skilled exponents – also lends itself to exciting and surprisingly delicate effects in faster music.

Not surprisingly, all the music for the quartet was either specially composed for them or specially arranged, often by members of the quartet themselves. Among the original compositions Thomas Doss’ extraordinary piece imitating the irritating persistence of a mosquito showed off the range of special effects that the four instruments can create, while Bramwell Tovey’s “Street songs” was a moving memorial to the victims of the second world war; indeed, my only regret in the whole evening was that the quartet only played three of the four movements of this impressive piece. The arrangements included Bruckner’s sublime motet “Locus iste”, which seemed made to measure for this combination of instruments. Bartok’s six Romanian folk dances, normally heard on stringed instruments, was amazingly effective, in particular the eery “bear dance”; while Arban’s “Carnival of Venice” provided some welcome buffoonery towards the end of the evening, with the euphonium showing off its extraordinary 5-octave range. The concert ended with the finale of Mendelssohn’s “Italian” symphony, another tour de force with the rapid triplets imitating the sound of tambourines executed with perfect clarity. A lovely touch of Italian warmth to cheer us in this dire winter!