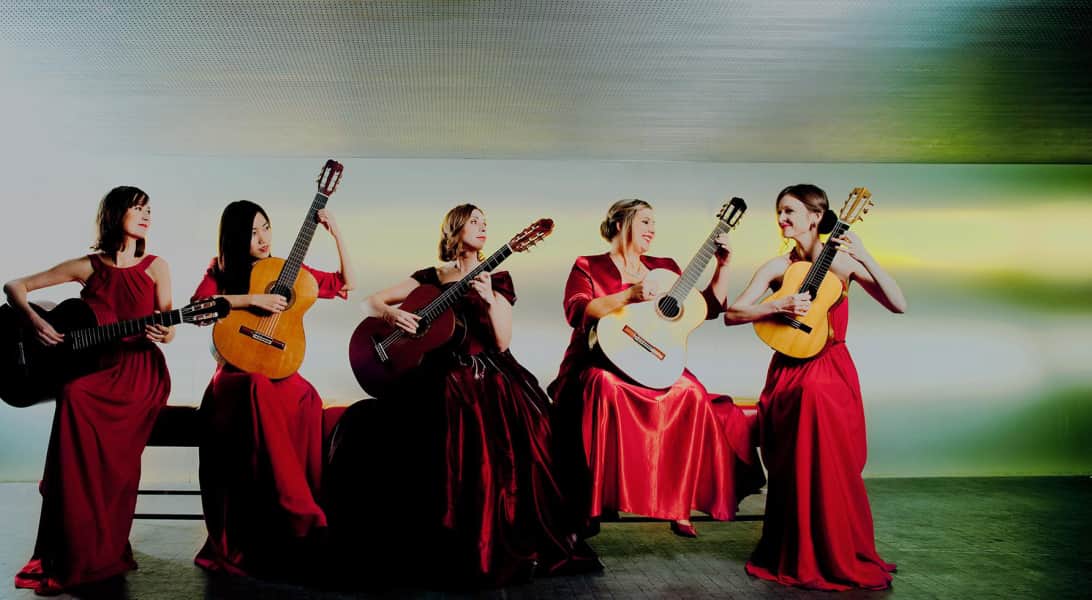 This unique ensemble of five young female guitarists from Bulgaria, Hungary, Russia, Japan and Austria have been enchanting a steadily growing international audience with their sensitive musical interplay and virtuoso performances. In 2014 they won 3rd Prize and the special Audience Prize at the 3rd International Competition for Guitar Ensembles in Aschaffenburg, Germany, impressive proof of their musicality. Thanks to their unusual line-up and original arrangements, Gitarrissima is breaking new ground in the genre of classical guitar music.

Members of Skipton Music enjoyed an unusual and early Christmas treat at the third concert of their 2018-19 season, given by the ensemble “Gitarissima” of Vienna. This group, founded in 2001, normally comprises five players – octave guitar, three standard guitars and bass guitar – but sadly one member had been taken ill and could not take part in their UK tour. Remarkably, the group were able at five days’ notice to rearrange all the pieces for the remaining four players, all the more extraordinary because the missing instrument was the octave guitar.

This reviewer has to admit to a certain prejudice against unorthodox instrumental groups, because they have to rely largely on arrangements of music more familiar in other (usually orchestral) versions and because the arrangement often lacks the variety and richness of the original. On this occasion, his fears were allayed from the first chord. Gitarissima have at their disposal an enormous range of idiomatic guitar colours – bell-like harmonics, misty tremolos, cheeky banjos, flamenco strumming, even African drumming using the hand to slap the belly of the guitar. The opening number, a suite from Bizet’s Spanish-inspired “Carmen”, showed how this array of possibilities could be put to thrilling effect. The American and Latin American sounds of a selection from Gershwin’s “Porgy and Bess” and Copland’s “Hoe down” were equally effective. Later in the programme, the guitars showed themselves equally capable of imitating the delicate touches of celeste in Tchaikovsky’s “Dance of the sugar plum fairy”, and bringing out the gentle but touching melodies of “Furusato” by the modern Japanese composer Shingo Fujii. The delightfully varied programme ended with two pieces by composers from Eastern Europe, conjuring up the dazzling colours and swirling patterns of the dances of this region.

For their encore, the group gave us a pot-pourri of American Christmas songs – but not as you have ever heard them before! We wish them well for the rest of their UK tour and a speedy recovery to their missing colleague.