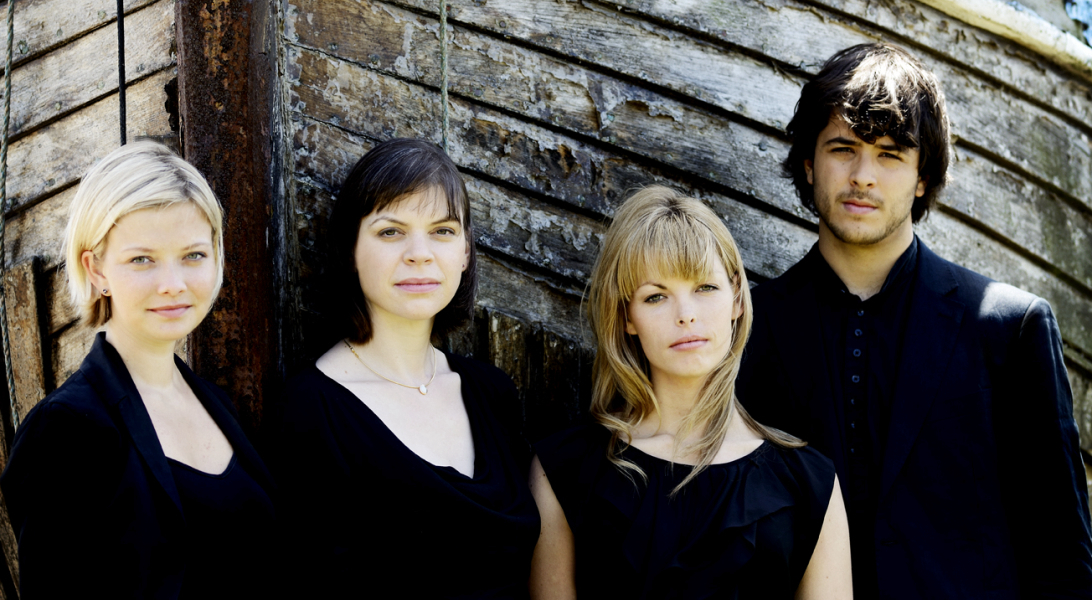 Formed in 2005, the Chiaroscuro Quartet comprises violinists Alina Ibragimova (Russia) and Pablo Hernán Benedí (Spain), the Swedish viola player Emilie Hörnlund and cellist Claire Thirion from France. Dubbed ‘a trailblazer for the authentic performance of High Classical chamber music’ in Gramophone magazine, this international ensemble performs music of the Classical and early Romantic periods on gut strings and with historical bows. The quartet’s unique sound – described in The Observer as ‘a shock to the ears of the best kind’ – is highly acclaimed by audiences and critics all over Europe.

LIGHT AND SHADE AT SKIPTON MUSIC

Skipton Music’s 2018-19 season continued with this deeply satisfying concert by the international string quartet Chiaroscuro. This quartet is unusual in two respects, at least for UK audiences. The violins and viola play standing up, which helps to give to their playing a freedom and flexibility more difficult for seated players. And they play on gut strings, using classical bows and a very sparing use of vibrato. In quiet passages this results in a transparent and luminous sound – the “clear” of the quartet’s name; but when appropriate they can also produce the fullness and intensity of tone one associates with modern instruments – the “dark” side.

Light and shade were in evidence from the opening bars of Beethoven’s quartet in D major, the third of his early opus 18 set. From the gentle and fluid opening to the high spirits of the last movement – played at breakneck speed but always under total control – this was a wonderfully musical interpretation of a work which is often overlooked in comparison with some of the more obviously striking quartets in this set. Next came Mendelssohn’s early quartet in E flat, with sumptuous tone in the opening movement, a delicate will-of-the wisp intermezzo, and a restless and anxious finale before the final triumphant resolution. Again, with such persuasive advocates one wondered why this work is played so rarely.

After a first half of relatively unfamiliar works Chiaroscuro turned in their second half to one of the best-loved quartets in the repertoire, Schubert’s “Death and the Maiden”. Once more the players made this seem totally fresh and vibrant. The fast movements were full of passionate, at times almost barbaric, intensity; but what really struck the reviewer was the chilly, otherworldly tone they produced for the music associated with Death in the song which gives the quartet its name and which is the basis of its slow movement.

All in all this was a performance which kept the audience on the edge of their seats throughout. Skipton is truly fortunate to have music of this quality brought to its very doorstep.