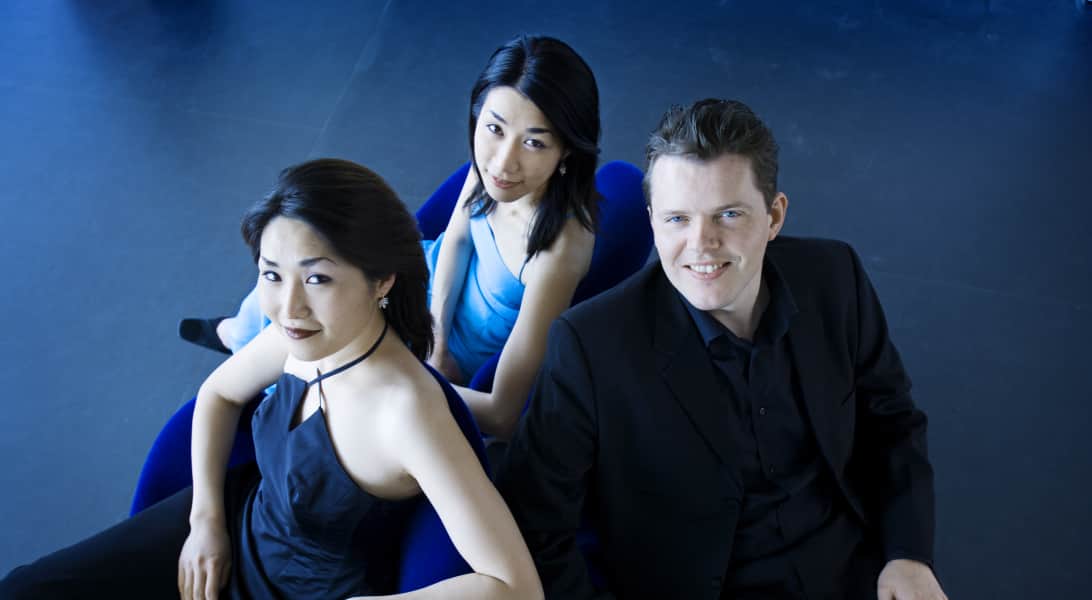 Trio Con Brio Copenhagen has throughout its career been hailed by press and audiences for its “unique sound and unity of interpretation”. Founded in Vienna in 1999 it has explored the trio repertoire with freshness and curiosity. The trio is in great demand and has an intensive worldwide touring schedule. Since its inception it has won most of the international competitions for piano trio. Trio Con Brio Copenhagen continues to play a central role in Scandinavia’s vibrant contemporary music scene. Several of Denmark’s most prominent composers, as well as Swedish composer Sven David Sandström, have composed for and dedicated works to the trio.

In the world of classical music a Trio consists of Piano, Violin and Cello as opposed to the Jazz combo of Piano, Bass and Drums.

The most important ingredient for either group is a rhythmic attack executed by everyone at the same time. The second is getting a good balance. With acoustic instruments and no technician twiddling knobs, this is not easy because the violin and cello have eight strings between them and the pianist has a lot more. However, the violin and cello can sustain a note for longer than the piano because the pianist’s note begins to die away the moment the hammer leaves the string. Today’s pianos are louder than those of the Nineteenth century since metal frames can withstand a higher stress. Likewise the string section has also benefitted from nylon and wire as opposed to gut, and it is now rare to see a string player having to replace a string during a concert.

From the opening pianissimo harmonics played by the violin and cello of Sandström’s ‘Four Pieces’ composed in 2012, it was apparent that Trio con Brio had solved the problems of both attack and balance. This was an eclectic work vacillating between atonal, tonal and whole-tone concepts; whilst textures of pointillism vied with arpeggios and tone clusters. But Trio con Brio sold it to the audience by their masterly technique and passion.

The Beethoven Trio Opus 70, entitled, ‘The Ghost’ is renowned for the extreme difficulty of the second movement marked, ‘largo ‘which is so very slow that it taxes the ability of the string players to keep their bows travelling to sustain the long notes. The pianist’s task is to underpin the rhythm whilst Beethoven’s melodies are hovering hawk-like throughout the movement. It was superb and made the contrasting ongoing presto breathtakingly exciting.

After the interval we heard Schubert’s Trio in Bb, D.898. Schubert’s music is often described as,’ heavenly long’ and if something is lacking in the performance just ‘long’ is the result. Trio con Brio banished any feeling of tedium by a sparkling rendition despite the violin not singing as powerfully as the music demanded where she could have added some extra delight in the upper register.

After resounding applause the Trio came back to play a movement from Dvorak’s ‘Dumky Trio’ . A generous and lovely encore to end a remarkable concert.