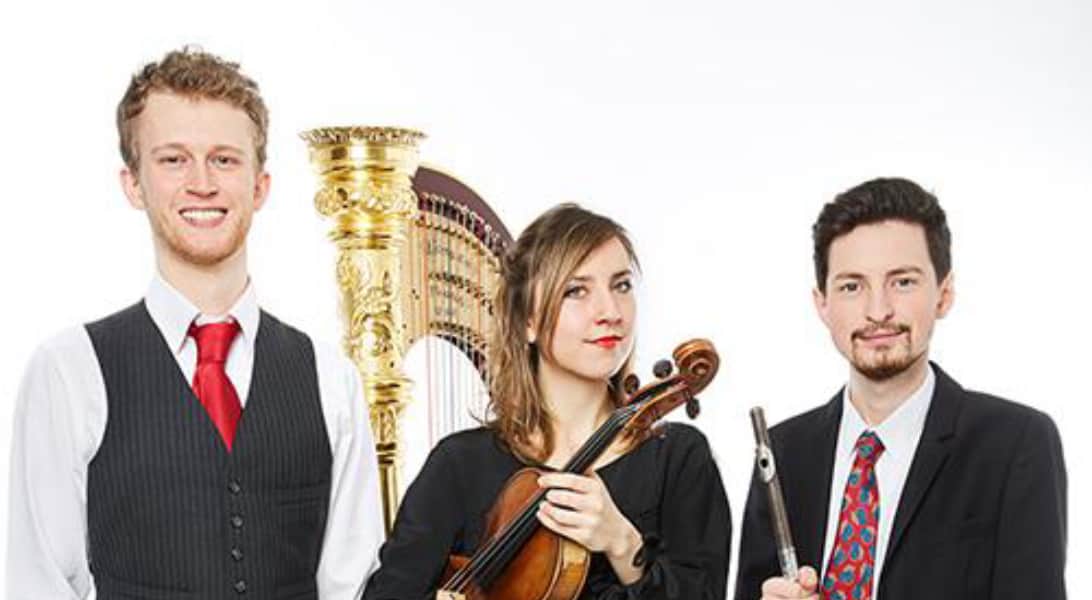 The combination of flute, viola and harp is not common and arrangements for the ensemble are necessary to add variety to a programme. The group began with a trio, composed by Dubois in 1905. Their ability to communicate with each other as well as the audience is exceptional because they play from memory and consequently haven’t the impediment of a music stand between the sound and the listener. There is a refreshing quality in their playing because of its directness coupled with a sparkling vitality stemming from their own enjoyment. They perform as one. There were no stuttering starts or ragged endings, and the phrasing was beautifully shaped. The second item was an Eighteenth Century Trio Sonata that adapted well for the ensemble. It was played in the spirit of its age with some tight rhythm that added the ongoing impetus that this music demands. Debussy’s Sonata for flute, viola and harp concluded the first part of the programme. The trio showed their flare for the dramatic elements of the music and their understanding of punctuating silences.

Chanson Triste and Melodie by Tchaikovsky arranged for viola and harp opened the second part of the programme, to be followed by a convincing interpretation of a Fantasy for Solo Flute by Telemann. However the real ‘plum’ of the concert was a commissioned work, a ‘Scherzo’ by Benjamin Graves. Graves uses some of the techniques of John Cage re-tuning the strings of the harp and viola plus asking the flute to play and sing at the same time to generate ‘multiphonics.’ The variety of colour and texture was an ‘ear-opener’ and although this avant garde style is desperately difficult to bring off on a concert platform the Trio triumphed over the technical difficulties and made this 21st century Music a thrilling experience.

The Concert concluded with three pieces from, ‘Le Tombeau de Couperin’ which was adapted by Morlock from Ravel’s orchestral version. As the Final Concert of Skipton Music’s season we couldn’t have done better.