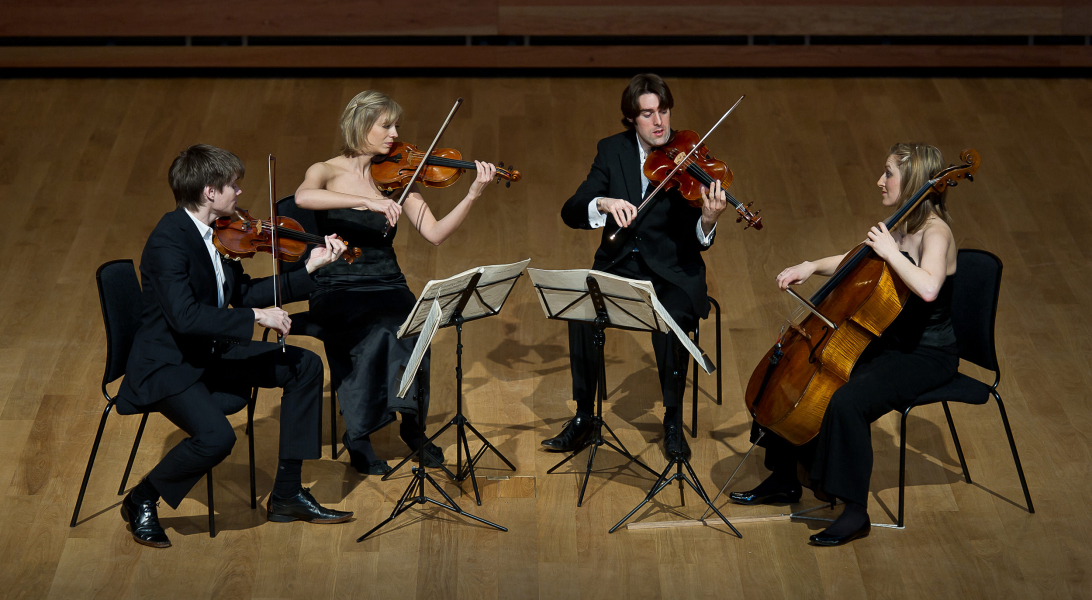 The award-winning Sacconi Quartet is recognised for its unanimous and compelling ensemble. It was formed in 2001 by four graduates of the Royal College of Music and has enjoyed a highly successful international career. Performing with style and commitment, the quartet is known throughout the world for its creativity and integrity of interpretation.

Robert Plane’s solo and chamber career has taken him to prestigious venues across Europe and beyond. He is particularly known for his championing of the magnificent English repertoire for clarinet and has been praised for his ‘ravishing lyricism and conviction’.

The string quartet opened the programme with Haydn’s 4tet Opus 76, Number 1. It appeared to be a sensible choice, to give the players time to ‘settle in’ before the Twentieth Century and Romantic Music that was to follow. But the ‘settling in’ period lasted some time throughout the Haydn with some untidy ensemble and unfocused melodic lines that fell short of Haydn’s intensions. Nonetheless there was humour in the Scherzo and some lovely changes of timbre in the Adagio.

York Bowen’s Quintet for Bass Clarinet and Strings dispels the ‘sheep and watercress’ image that was ascribed to English Music of this period. The combination of Bass Clarinet and String Quartet would appear an unlikely mixture until one hears York Bowen’s clever instrumentation. This is a difficult work, Bowen was renowned for taxing his players, but they overrode the complexities and it was a musically convincing performance.

Glazunov’s ‘Oriental Reverie for Clarinet Quintet’ transported the audience via liquid clarinet melodies and lovely strings to a mystical land of dreams. It set the mood for the final item which has always been a showpiece for the clarinet, - Weber’s Clarinet Quintet in B flat, Opus 34. This stunning tour de force has been played and recorded by umpteen clarinettists, many who have, ‘burbled and squeaked’ their way through the wonderful music. I have never before heard such a superb performance as I did tonight. Robert Plane has no technical problems and so he is able to get to the heart of the Music without either appearing to struggle or show off. His dynamic range is extraordinary without any loss of articulation even in the quietest moments and his evident joy of playing is something that few musicians are able to project to an audience.

As the first concert for the Skipton Music season, this sets a high bar.