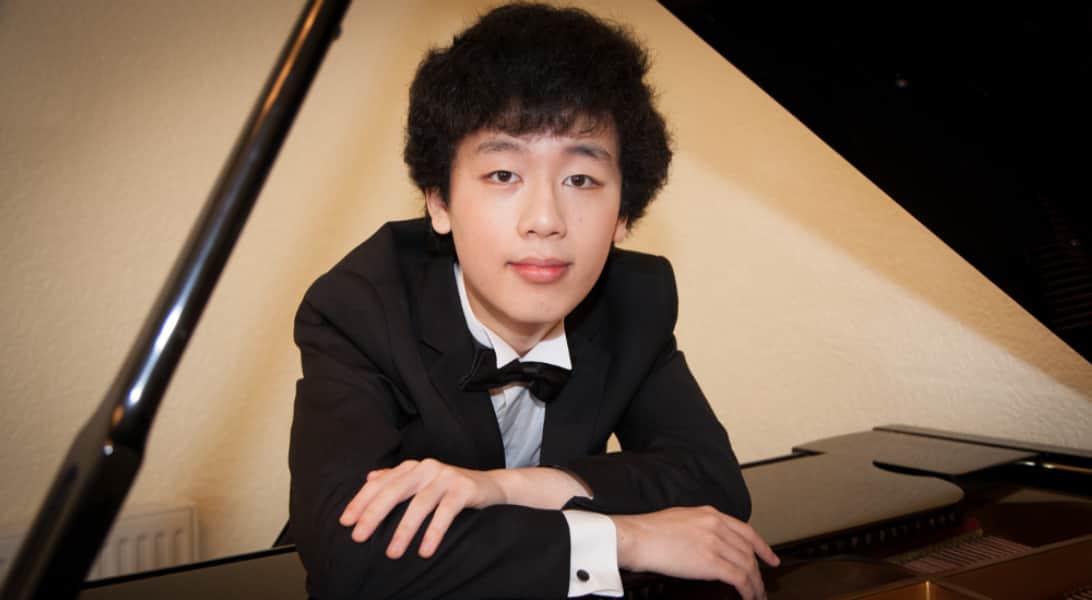 Yuanfan Yang began playing piano at the age of six, passing Grade 8 at age eight and a Diploma of the Associated Board of the RSM at age ten. He currently studies piano and composition and has been awarded for both. He received first prize for piano performance in the Keyboard Category of the BBC Young Musician Competition, 2012 and in 2014 won first prize at the International Franz Liszt Competition in Weimar. He has performed in notable venues in this country and we welcome this young artist on the ascendant to Skipton.

Yuanfan Yang is eighteen years old. He has a fabulous piano technique, he composes music and he also writes his own programme notes. He has been rightly dubbed a ‘prodigy’, although he certainly doesn’t fit the image of a cosseted youth, nor is there any need to knock a year or two off his age to retain a childish image – a scam employed by as Mozart’s father. This is a powerful young man with a confident platform presence who communicates authoritatively with his audience.

Liszt’s tone poem, ‘La Vallee d’Obermann’ was an unusual item with which to begin a recital because not only does it exploit the instrument to the full, the interpretation required to tell the story demands the full spectrum of instrumental colour. There were times when in the interests of the drama Yuanfan Yang forced the tone of the piano, particularly in the bass and the instrument lost its resonance and became harsh, but he captured the true essence of Liszt’s pianistic spirit via his formidable technique.

‘Ode to the Atlantic’, written by Yuanfan Yang after a cruise exploited some of his delicious upper scale-work and was indeed perfect Cruise Music.

Schumann’s ‘Carnaval’ and Schubert’s ‘Klavierstucke No. 1 were well grasped, but percussive heavy passages threatened to burst the framework of the music and the harsh barking tone in bravura passages was an unnecessary overload for the instrument.

‘Landscape’ by Philip Cashian born in 1963 was played with gentle love and care - perfect for this minimalistic composition.

Prokofiev’s Sonata was a triumph. Yuanfan Yang carried his audience through three movements to portray a gamut of emotions by carefully shaping each musical paragraph to reveal the troughs and pinnacles of the range of the composer’s reactions.

Liszt’s La Campanella as the encore piece brought the recital to sparkling close.

We shall hear more of this gifted musician.