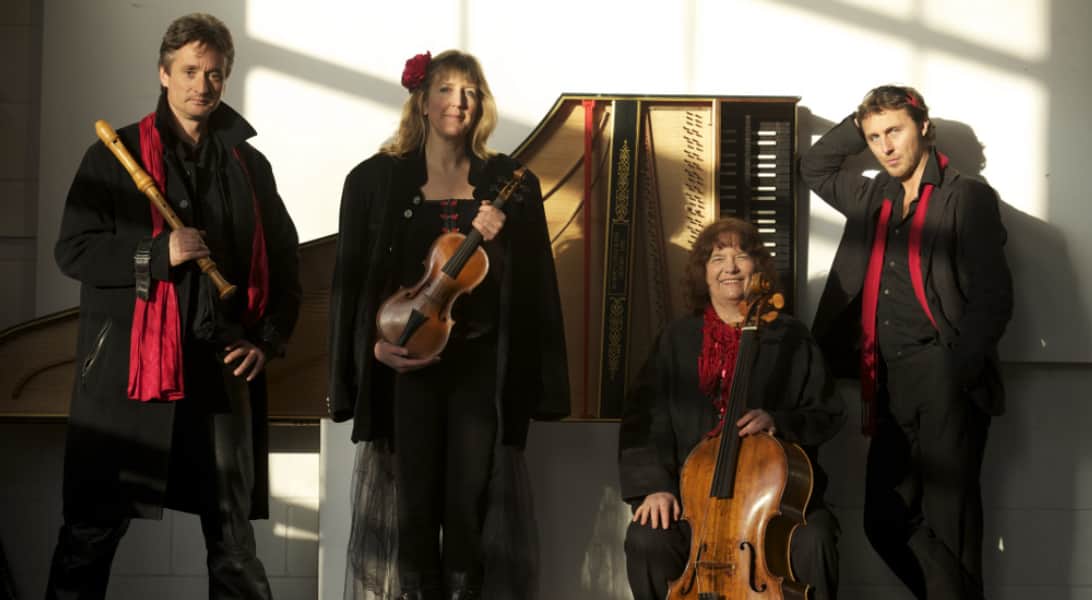 The early music group Red Priest has been described by music critics as ‘visionary and heretical’, ‘outrageous yet compulsive’ and ‘with a wicked sense of humour’. Founded in 1997, and named after the flame-haired priest Vivaldi, Red Priest has given several hundred sell-out concerts in many of the world’s most prestigious festivals. The four musicians have redefined the art of period performance through their creative arrangements, performing from memory with swashbuckling virtuosity, heart-on-sleeve emotion and compelling stagecraft.

Amalgamating two musical genres is fraught with problems; insomuch as the result can be half-baked eclecticism.

Red Priest takes Baroque as its basis and the programme was devoted entirely to Handel which they updated by using quotations from later works. By employing a violin and a ‘cello, as opposed to viols alongside the harpsichord, they have a very nice ‘backing group’ for Piers Adams who stars as The Red Priest playing the whole family of recorders from bass to sopranino.

Adaptations of ‘Messiah’ used the recorder as the solo vocal line in the arias but the most successful moments were in the stromentato recitatives where the instruments were employed to maximum illustrative effect in a true Baroque style.

Piers Adams is the principal soloist in the group and his technical dexterity is brilliant, although intonation wasn’t his strong point in this concert and the phrase endings often drooped in pitch.

The Baroque ornamentation and embellishments were dazzlingly executed but eventually one became accustomed to them and they tended to lose their impact. Even by increasing the tempi to a point where it became difficult to hear individual notes these special effects became blurred and took on the aspect of routine. However the ‘Recorder Sonata in B minor’ was beautifully judged and the decoration served to carry the melodic lines with elegance and purpose.

I was disappointed in that I could find little jazz or rock in the programme. The harmony was left in its original diatonic state without the addition of any chromaticism and the rhythms were rarely rocked or syncopated.

But the packed hall and enthusiastic applause from fans of the group, some who had travelled a considerable distance to hear Red Priest, made for a good atmosphere and hence a successful concert.