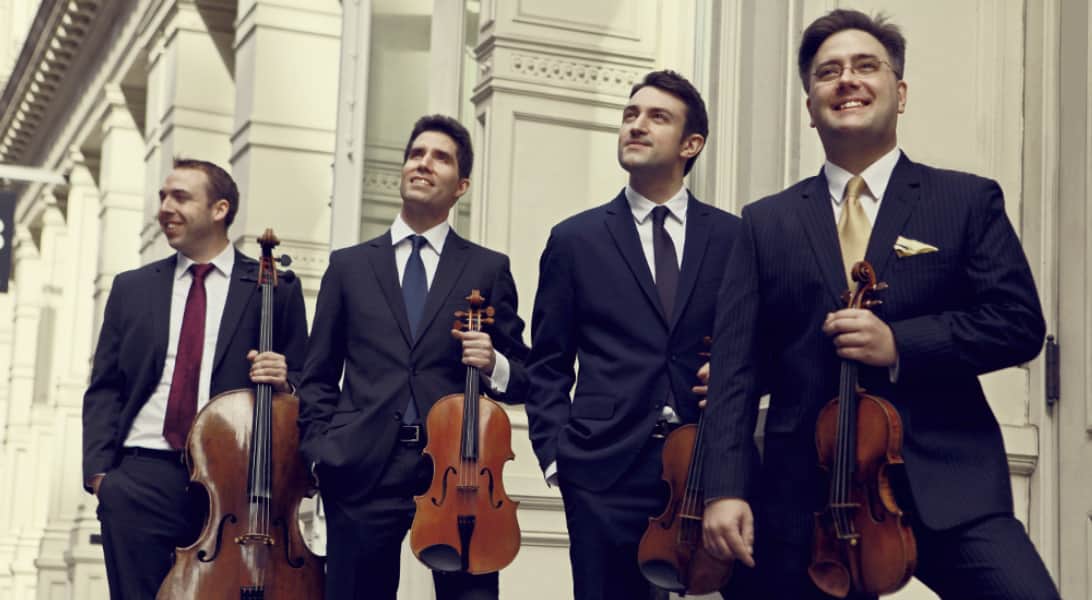 Since its inception in New York in 2005 the Escher String Quartet has received acclaim for its profound musical insight and rare tonal beauty. As a BBC New Generation Artist from 2010-2012 the quartet gave debuts at both Wigmore Hall and BBC Proms at Cadogan Hall. The ensemble serves as Artists of The Chamber Music Society of Lincoln Center and in 2013 was awarded the prestigious Avery Fisher Career Grant. While continuing to flourish in America, the Escher Quartet is increasingly making a distinctive impression throughout Europe as it receives consistently high praise for its work.

This, the First Concert of the Season, given by the Escher String Quartet was broadcast from the Town Hall making it the first live broadcast via BBC Radio 3 in both the history of the society and the newly refurbished building.

From the opening gentle notes of Mendelssohn’s Fourth String Quartet we were listening to a group of players that is in the ‘Premier League’ of string ensembles.

Beginning a concert programme with the delicate entry Mendelssohn demands allows neither space for poor intonation, nor any hint of sputtering nervousness in the bowing. The Escher’s Mendelssohn floated in without any technical impediment and continued, notable for a lightness of touch in the Scherzo, beautiful cantabile in the Andante with everything welded together by the fine intonation and rhythmic unity of the players.

Janacek’s Expressionist String Quartet No. 1, “Kreutzer Sonata”, portrays the feelings aroused by the jealousy and misery of an unhappy marriage. To achieve these dimensions of private abstract spheres of consciousness, Janacek asks the players to enter a region far removed from Mendelssohn’s gentile drawing room. The Quartet took us into these sensitive realms by an interpretation that thoroughly exploited the instruments and they delivered the maximum impact of the dramatic concept, capturing the kaleidoscopic changes of mood which lie in the human spectrum.

Needless to say, Brahms Quartet No. 2 which occupied the second part of the programme was played with the same technical mastery and interpretative musicality. The attention to detail, careful balancing of the instrumental lines, coupled with a mature concept of this challenging music resulted in a memorable performance.

The Escher Quartet communicates the composers’ ideas without thrusting their own personality and technique ahead of the realisation of great music. They are a true vehicle to realise a composer’s creation. Each performer in the quartet verges on virtuosity but this is only the beginning of their magic. The group chemistry in that they play as one without any weakness in the structure is rare and it is this quality that sets them apart from less accomplished ensembles. It was a stunning concert and Skipton Music deserves congratulations not only for acquiring such a dazzling prize to open its season but also for its smooth organisation. The atmosphere is unique insomuch as it is friendly without being down-market and well-mannered without elitism. It is indeed a cultural asset to our town.