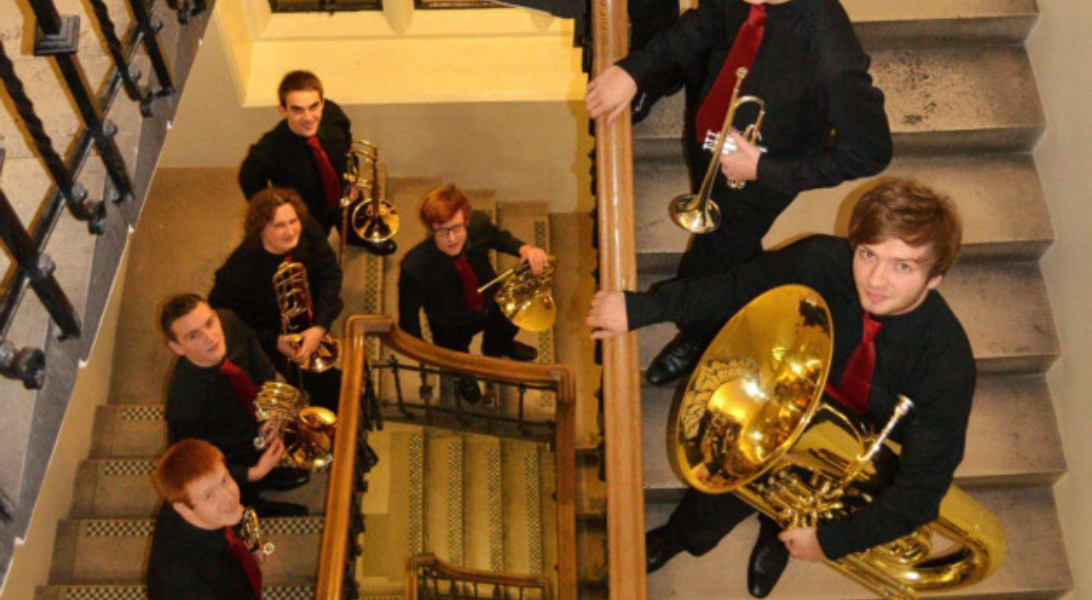 Formed in December 2011 by 10 students at the Royal College of Music, Kensington Brass are a versatile brass dectet, covering repertoire of all genres, from Baroque and Renaissance to Jazz and Film music. Members of Kensington Brass have played professionally with the Philharmonia Orchestra, London Symphony Orchestra, City of Birmingham Symphony Orchestra, Orchestra of the Royal Opera House, London Sinfonietta, Birmingham Contemporary Music Group and Konzerthausorchester Berlin.

Kensington Brass is an ensemble of ten players which was formed three years ago. It is based at the Royal College of Music and consists of four trumpets, (one of which is Adam Stockbridge a local player now in his fourth year at RCM), four trombones, a French horn and a tuba. The ensemble is modelled on the Philip Jones Brass Ensemble.

The group had wowed the local school children in the afternoon with a full blown concert. They had travelled from London in the morning and it was a tribute to their stamina and professionalism that they could sustain both afternoon and evening concerts without appearing to run out of energy or puff!

Their first Fanfare by Vaughan Williams gave us a taste of what was to come. The fear that they would produce a homogenous brass blanket of sound was instantly banished. In Christ Church the acoustics are very resonant, and Vaughan Williams' Fanfare in the hands of lesser musicians could have sounded like an organ prelude. Happily, each instrument bestowed its own timbre and dynamics to the music. It was from this opening rendition that the strengths of the ensemble were apparent.

The programme was divided into four sections and was introduced by Ryan Linham, who was also responsible for many of the arrangements. We began with Baroque music. Purcell, Bach and Albinoni were beautifully adapted to display the colour of each instrument and there was a nice crispness in the playing.

Alas! John Williams' 'Jurassic Park' lacked the tight rhythmical attack required for this genre. The group failed to weld the fragmented thematic material into a decent gestalt and it sounded bitty and unrelated. One wished for a percussion section to act as an anchor. Fortunately they were rescued by the trombone section in 'Thunderbirds' and in the Disney Selection they surprised us with a very decent barbershop quartet which re-established the rapport of the players with their audience.

After the interval, we heard two arrangements of choral works by Poulenc. Poulenc's delicate major seventh progressions require precise intonation. Kensington Brass rose to this challenge superbly. Sometimes the rhythm and ensemble could have been more cohesive but the tuning was impeccable. Staccato 'Ostinato', from Tchaikovsky's 4th symphony was expertly performed on muted instruments which again was a further testament to precise pitching.

'Music for Pieces of Metal' used the 'plop technique', where the players tap the mouthpiece with a cupped hand to get a tuned, percussive effect. Having witnessed a split lead pipe due to a heavy handed 'plopper' in the 1970s I feared for the instruments. Happily no harm was done and this minimalistic piece in the style of Philip Glass, using a John Cage technique was a well programmed item.

Then we hit the 'Jazz and Popular Music' section.

Great stuff. Great tunes. Great playing. However, moving an 'Evergreen' through foxtrot, waltz and tango smacks of over-engineering. Good tunes sing for themselves and excessive tinkering can detract from a well-loved original.

But this group provides a super programme which includes something for everyone.