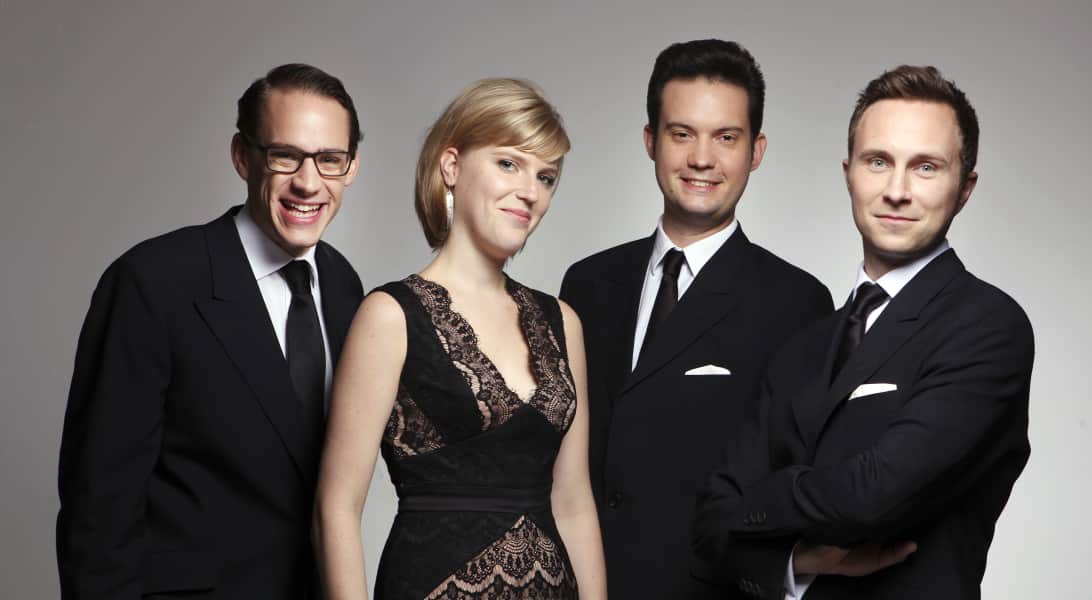 The Doric String Quartet has firmly established itself as the leading British string quartet of its generation, receiving enthusiastic responses from audiences and critics across the globe. They regularly perform in leading concert halls throughout Europe. In 2010 the quartet made its highly acclaimed American debut, and now return for annual tours to North America. The Quartet also has a very busy festival schedule. Their release of Haydn’s Op. 20 Quartets was shortlisted for a 2015 Gramophone Award.

Imaginative programme planning given today’s down-streaming facilities is a crucial element for a concert in this era where anyone can select anything from an immense spectrum of Music.

The Doric’s programming was clever.

The quartet by Thomas Ades, composed in 2011 was played with great conviction. It is not easy listening or easy-play. During the interval I overheard comments to the effect of, ‘What was that about?’

Why does contemporary music engender such a reaction? It is curious to think that the same remarks were made when Haydn and Beethoven were first performed.

I only know of one person who had the guts to shout, ‘Rubbish’ after a first performance of an Opera which, despite his cry, which was clearly transmitted by Radio 3, became part of the Twentieth century repertoire.

It It is our custom to sit politely wondering if it is our ears or our musical education that is at fault. We are not alone; the same reaction is common throughout Europe.

The Doric players are all outstanding musicians. The anacrusis up-bow entries In the Mendelssohn were beautiful and proved the total coherence of the group. It is easy to forget that the secret of such excellence in an ensemble rests on a fraction of a second in co-ordinating four individuals.

Father Haydn’s string quartet which formed the second part of the programme suffered from a tiny glitch in the variation movement which served to remind one that this quartet had not been generated by robots, nor engineered by a ‘sound-man’. I left the re-furbished Town Hall with its raked seating thanking Councillor Simon Myers for his initiative in transforming a municipal hall into a Concert Hall. All in all, a good start to Skipton Music's 2017-18 Season.