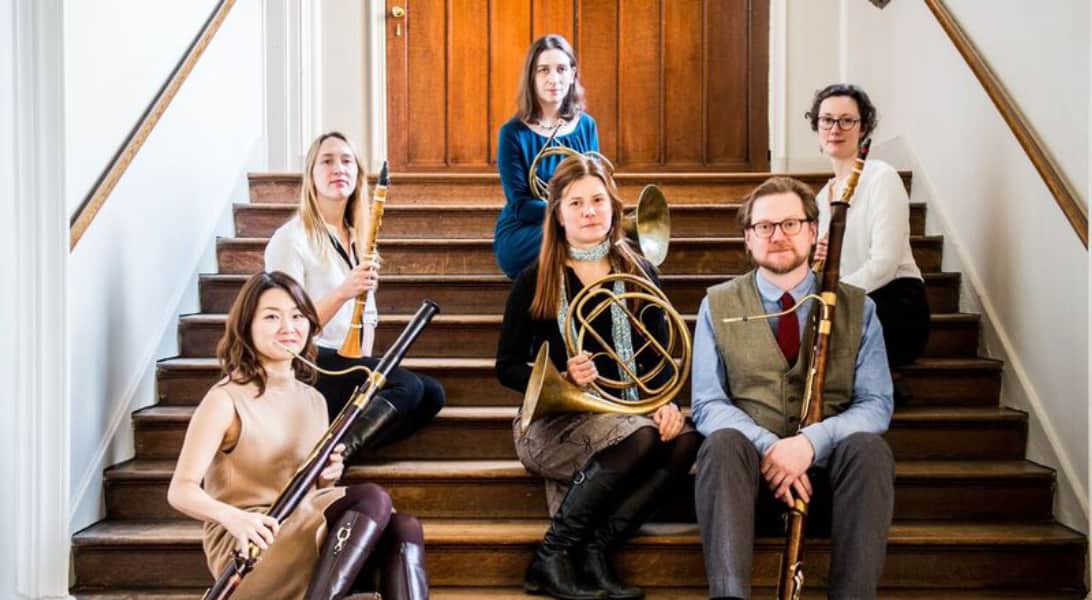 Boxwood & Brass is the UK’s only period-instrument Harmonie, the 18th century wind ensemble beloved by Mozart and Beethoven. Praised for ‘spectacular playing’ and ‘button-bright performances’, the ensemble’s programmes are a journey through the world of Harmoniemusik, including new arrangements made for the group in the best historical traditions. Formed in 2013, Boxwood & Brass is already in demand from top festivals and venues and recently released its debut CD Music for a Prussian Salon to unanimous critical praise.

At first sight the programme for this ensemble looked somewhat mundane. A hurriedly written Sextet by Beethoven, a Mozart Serenade arranged by one of the ensemble, two short movements by Weber and an arrangement of Mozart’s Symphony No.39. The ensemble comprises 2 clarinets, 2 horns and 2 bassoons all playing replica period instruments to preserve the authentic sound of the era. The first item, Beethoven’s Sextet showed that when Beethoven wasn't inspired, his writing could be mediocre. The players did their best to make it sound good. They were, ‘playing in’ and acclimatising to the ambience of a well packed Town Hall. The work served well as an ‘opener’, despite lacking the ongoing drive that we associate with better Beethoven compositions.

However, the second item, Mozart’s Serenade in C minor was a different kettle of fish. It was arranged by bassoonist Robert Percival and gave the players scope to show their command in tone quality and dynamics.

After the interval, the ensemble talked about the instruments pointing out the differences from today’s technological engineering.

The most startling item was Mozart’s Symphony number 39 in Eb. Six wind players performing a Mozart Symphony seemed a reckless undertaking but this was a masterly arrangement. They had to serve not only as a wind section but also they had to represent the power-house of the orchestra, namely the string section. The balance was little short of miraculous with horns powerful enough to drown the rest of the group, playing quickly and quietly. It was an outstanding tour de force. The stamina required by every player to blow an instrument for such a taxing programme and still be able to give such a splendid rendition of this Mozartian colossus was an achievement in itself.

As I left the Town Hall a gentleman confronted me somewhat sternly and said, ‘I hope you are going to give them a good write up.’ No problem!